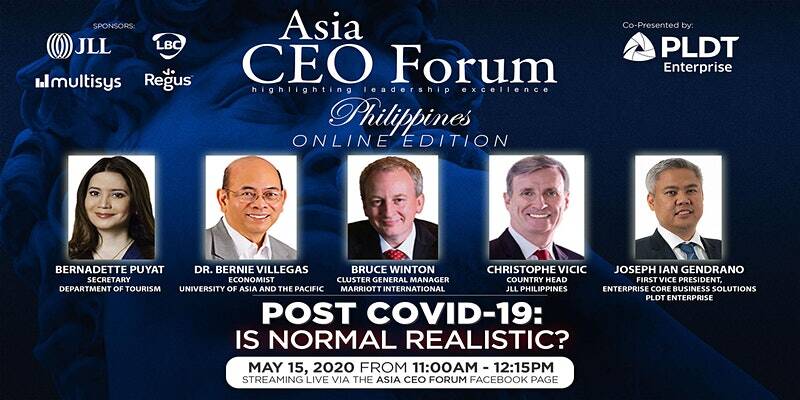 The personal and economic impact of COVID-19 has been historic. How are we ever going to get back to normal? Will it take months, years or longer?

Join us for Asia CEO Forum ONLINE on May 15, 2020 from 11AM-12:15PM at the Asia CEO Forum Facebook page at https://www.facebook.com/AsiaCeoForum. Co-Presented by PLDT Enterprise with Major Sponsors JLL, LBC Business Solutions, Multisys Technologies and Regus | Spaces.

Completely FREE for all! Let’s hear what senior leaders are doing to keep their employees safe and enterprises from failing.

Prior to joining the Philippine telecom giant, he was Vice President of IT at the Goldman Sachs Group, New York USA. He also held Technical Sales positions at Verizon Business and Cisco Systems.

Bernadette Romulo-Puyat
Secretary
Department of Tourism
Bernadette oversees one of the highest profile government agencies in the Philippines. Tourism has been designated as an industry key to the countrys future development. Bernadette was previously

Undersecretary of Agriculture where she was responsible for implementing a wide range of projects to improve the lives of farmers.

Dr. Bernie Villegas
Economist and Professor
University of Asia and the Pacific
Bernie is widely known as the nation’s most prominent Economist. He has PhD in Economics from Harvard University where he was one of its youngest ever teaching fellows. He is a past Professor at the the University of Asia and the Pacific (UA&P), Research Director of the Center for Research and Communication, Manila and Visiting Professor of IESE Business School in Barcelona. Dr. Villegas is author of widely used economics textbooks in the Philippines as well as management best-sellers like The Philippine Advantage, Book of Values, Productivity: Path to Global Competitiveness, The Filipino Phenomenon, and The Philippines at the Threshold of the Third Millennium.

Christophe Vicic
Country Head
JLL Philippines
Christophe is considered one of the region’s most senior real estate leaders. Overseeing Philippines operations of Asia’s largest real estate advisory firm, he was previously based in Moscow as head of JLL Russia and CIS. Originally from France, he has overseen large operations across Europe, the Middle-East and Africa. For DHL, he led country operations in 7 countries of Africa, as well as Poland, Russia and all of the former Soviet Union Republics.

Bruce Winton
Cluster General Manager
Marriott International
Bruce is the nation’s highest profile leader in the key hospitality sector. He has award-winning experience operating large, downtown hotels in the world’s leading cities across 3 continents. Bruce has been important in professionalizing the hospitality industry in Philippines. He is also former President of the American Chamber of Commerce of the Philippines.

Nigeria fought and won it's independence from the

Do you think what is happening in Nigeria now is t