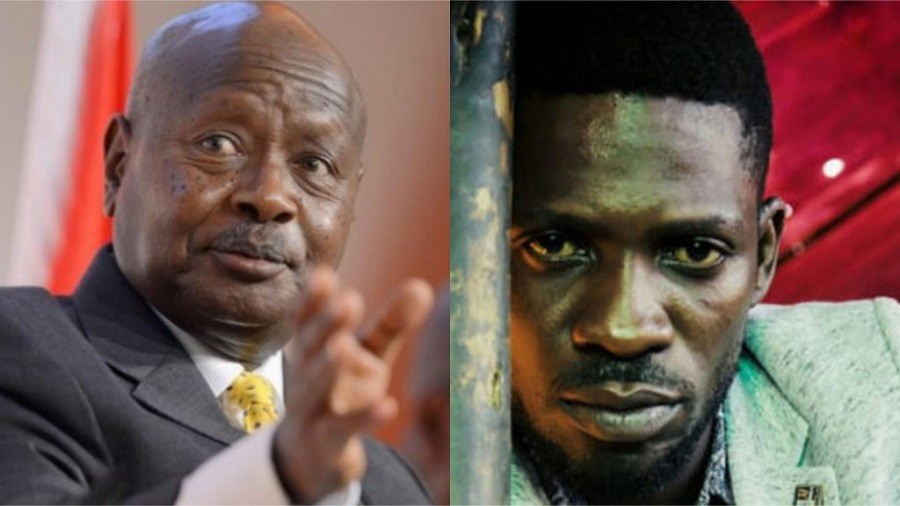 Bobi Wine, real name Robert Kyagulanyi, garnered international prominence last year when he was arrested and later charged for treason by the repressive government of one of Africa’s longest-serving presidents, Yoweri Museveni. He had been arrested alongside several key opposition politicians for allegedly stoning the President’s convoy. He strongly denied the allegation as trump-up charges aimed at silencing opposition to the 33-year-old rule of Museveni.
The 36-year-old Kyagulani would later accuse government of meting out torture and inhuman treatments to him while in prison, allegations the President dismissed as fake news. After initial bail, he would be rearrested as he was trying to travel out of the country to seek medical treatment.

“The Uganda Police have violently blocked Bobi Wine from travelling outside of the country in spite of the court declining to do so when being released on bail earlier in the week,” his Ugandan lawyer Nicholas Opiyo had announced, adding, “This is absurd to say the least.”
Kyagulani’s international lawyer, Robert Amsterdam, would further argue, “Bobi Wine was fully within his rights to travel for medical treatment. Again, he has done nothing wrong. Again, he has broken no law. And again, the police beat him and detained him and will later make up some sort of false excuse.”
His military detention sparked vehement protests from Ugandans and rights activists abroad till government effected his release.
A judge later allowed Kyagulanyi to keep his passport, against the wishes of state prosecutors.

How reggae star became a politician
Prior to 2017, Kyagulanyi’s fame in his country was because of his music. He was known as the reggae star, Bobi Wine. That year, however, he would leverage on his music fame to make a foray into the politics of his country. To the shock of the conservative ruling party, he won a parliamentary seat as an independent in the same year.
Self-styling as the Ghetto President, and championing the cause of the poor, he has since been leading opposition lawmakers and activists to condemn some government policies, releasing several songs that champion democratic rule, social justice and also are highly critical of the President and his policies in the East African nation.

Judging by how 77-year old Museveni has tightly held reins of government for more than three decades, and how ruthless he brooks no form of opposition, Bobi Wine’s challenge looks like a daring foray to where angels would even fear to tread.
His numerous brushes with state authorities and many attempts to silence him are much of the significance of the challenge he poses to Museveni. The singer-politician ability to galvanize the largely youth-dominated Ugandan population has become headache for Museveni.

President Bobi Wine?
“On behalf of the people of Uganda I am challenging you [Mr Museveni] to a free and fair election in 2021,” that was how Wine announced his presidential bid at an event in the capital, Kampala.
Although President Museveni has yet to declare his intention to run in the 2021 election, his bid to continue in power had enjoyed an indirect approval by the parliament, which approved changes to the constitution last year to scrap the age limit of 75 for presidential candidates.
Since his rule began in 1982, he has changed the constitution twice to extend his stay in office. Moreover he has shown he could be ruthless in retaining his seat.
Wine is, though, undettered by this as he banks on the people to give him the mandate to chart a new course for the East African nation.
“I know the danger I am going to face to challenge Museveni but I have been encouraged by Ugandans that I am the leader they want,” he told AFP news agency.

Wine has also announced he would not be running under any political party and the revolutionary movement seeks to create “a society which works for everyone.”

His bid has not gone all smoothly, though. His suitability for the post has been questioned several times. Mr Museveni has also dismissed his opponent as a club singer. He was even once mocked for misinterpreting a question on fiscal policy in a television interview.
His response to the derision? Wine released a single, Simple Fiscal, which is about making the lives of Ugandans better. He has argued that his supposed deficiency in technical issues will be handle by skilled Ugandans; his is to offer leadership.
A measure of how far the singer-turned-politician has affected the Ugandan political landscape is the sudden tour of the country by the often unbothered President Museveni, who has been handing out cheques to different interest groups as part of what he calls Operation Wealth Creation, 18 months before the presidential contest.