Mohamed Ali (later Dusé Mohamed Ali) was born in Alexandria, Egypt on Nov. 21, 1866. He was a man whose life spanned careers as well as continents. An actor, publisher, editor and journalist, he travelled across the world, lectured in the United States and worked with Marcus Garvey before ending his days in Nigeria. Ali is also part of British Black Muslim heritage and most importantly, in 1912 he founded the African Times and Orient Review, later revived as the African and Orient Review, which published in total through 1920. He lived and worked mostly in England, but lived sometime in the United States and in Nigeria where he founded the Comet Press Ltd, and The Comet newspaper in Lagos.

Mohamed’s father, Abdul Salem Ali, was an officer in the Egyptian Army while his mother was Sudanese. He received his early training in Egypt, but between the ages of nine and 10, his father arranged for him to go to England to further his education. In June 1882, after violence had erupted in Alexandria, the British bombarded the city killing Mohamed’s father and brother. This conflict eventually resulted in the British occupation of Egypt.

Although Mohamed was only 16 when these events occurred, they made a great impression on his life and played a crucial role in shaping his anti-imperial stance in later life.

After his father’s death, Mohamed had no financial support and had to leave school. At first, he made his living as an actor with Wilson Barrett’s theatrical company, adopting the non-Arabic name ‘Dusé’, moving with them to the United States of America (USA) and Canada in 1886. While in America, he also worked as a ‘penny-a-liner’ journalist and a clerk for several years before returning to Britain in 1898 to resume acting for 11 more years.

Soon after, Mohamed found himself in the company of Herbert Beerbohm Tree and in Lillie Langtry’s production of Antony and Cleopatra at the Royal Princess Theatre, London. In 1902, as an actor, Mohamed toured the British Isles, playing parts in Othello and as Prince of Morocco in The Merchant of Venice at Hull, Yorkshire making him to possibly be the first African to play Othello.

Later on, he wrote several plays, producing The Jew’s Revenge (1903) at the Royal Surrey Theatre in London, A Cleopatra Night (1907) at Dundee, and the Lily of Bermuda (1909), a musical comedy at the Theatre Royal, Manchester. His production and performance in A Daughter of Judah (1906), which he first produced in the Glasgow Empire Theatre (GET) received particularly good evaluations.

While in London, he founded the Hull Shakespeare Society, of which Sir Henry Irving was the first President. Representing his political interests and considerable British interest in the Orient, he also founded the Anglo-Ottoman Society, London. Its members included Lords Newton, Lamington, Stourton and Mowbray. Also, Mohamed toured in the United States, where he produced several plays and won recognition as an actor.

In 1915, Mohamed founded and was Secretary of the Indian Muslim Soldiers’ Widows’ and Orphans’ War Fund. Among its patrons were Consuelo, the Duchess of Marlborough, the Right Hon. D. Lloyd George, Sir Edward Grey, Lord and Lady Lamington, Lord and Lady Newton, the Marquis and Marchioness of Crew, Mrs. H. H. Asquith, Sir Austen and Lady Chamberlain, Lord Curzon, and almost all the members of the British Cabinet.

Following his acting career Ali developed an interest in politics and became a freelance journalist. Many of his early articles focused on British policies towards his native Egypt. Due to illness, he sought warmer climates and began traveling the globe to Bombay (India), Hong Kong (China), the Caribbean, and the United States. His travels further acquainted him with global affairs and between 1909 and 1911 he published several articles that challenge imperialism against Africans and Asians. Mohamed published his first book in 1911 titled In the Land of the Pharaohs: A Short History of Egypt from the Fall of Ismail Pasha to the Assassination of Boutros Pasha. Reputedly the first history of Egypt written by an Egyptian, the book received critical acclaim, catapulting Ali into international, and especially Pan African, prominence. 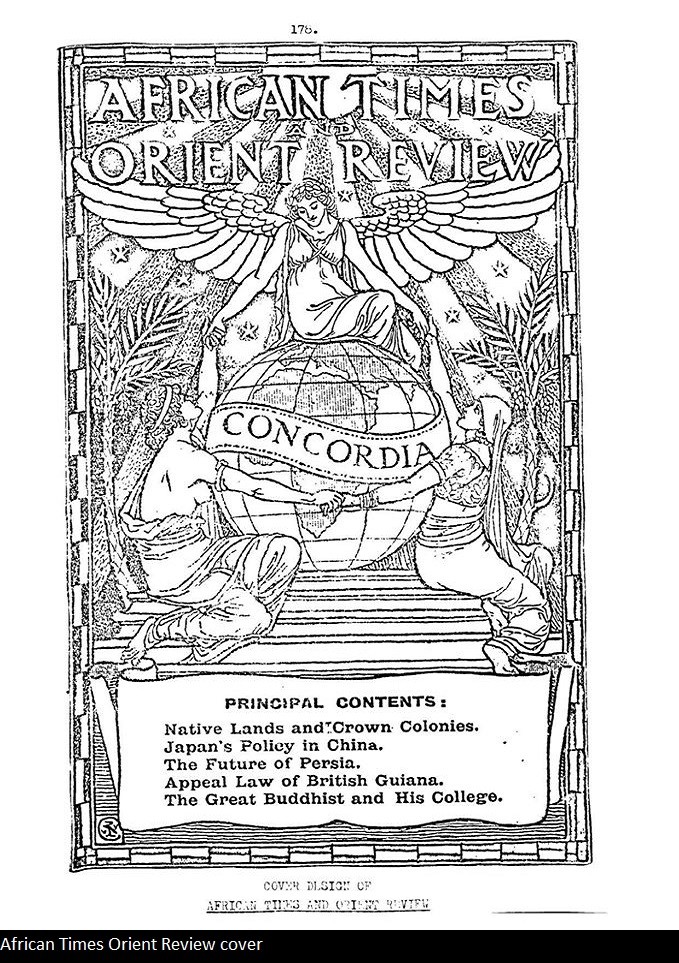 In 1912, Mohamed launched African Times and Orient Review, the first newspaper in England owned and published by a black person. They advocated Pan African-Asian nationalism and that was a forum for African intellectuals and activists from around the world. The journal covered issues in the United States, the Caribbean, West Africa, South Africa, and Egypt, as well as in Asia, including India, China, and Japan. Through these publications, he developed relationships with a number of black intellectuals, including Booker T. Washington, W.E.B. DuBois, Alain Locke, and Marcus M. Garvey. He became particularly close to Garvey and joined Garvey’s United Negro Improvement Association (UNIA) where he serving as the foreign secretary and the head of African Affairs contributing articles on African issues to the Negro World, and heading a department on African affairs. Mohamed had come to the United States to promote his vision of economic Pan Africanism, seeking to set up a commercial link between West Africans and US Africans.

In the 1920s, he repeatedly but unsuccessfully tried to secure US African financing to enable West African produce farmers to secure markets and exports to the United States, wresting control from major British firms, such as Lever Brothers. In the 1930s he failed to gain Euro-American capital for the same purpose. Mohamed left the UNIA following Garvey’s 1927 deportation from the United States.
In 1931, Mohamed left permanently for West Africa settling in Lagos, Nigeria primarily to watch over his interests in the cocoa business. He settled in Lagos, where he was appointed editor of the Nigerian Daily Times.

On Oct. 3, 1932, Mohamed produced the play A Daughter of Pharaoh in the Glover Memorial Hall, Lagos. According to The Nigerian Daily Times, it “set a new standard in Lagos entertainment, introducing real stagecraft. After a while, Mohamed became editor of the Daily Telegraph, Nigeria.
On July 27, 1933 Mohamed expanded his publishing interests and founded The Comet, a weekly newspaper. He took great interest in the educational and general welfare of the Muslim community in Lagos.

Following a protracted illness, Mohamed Ali died at the age of 78 in the African Hospital, Lagos, on June 25, 1945. His funeral took place on June 27, 1945 with well over 5,000 attendees, including political, social and religious leaders.