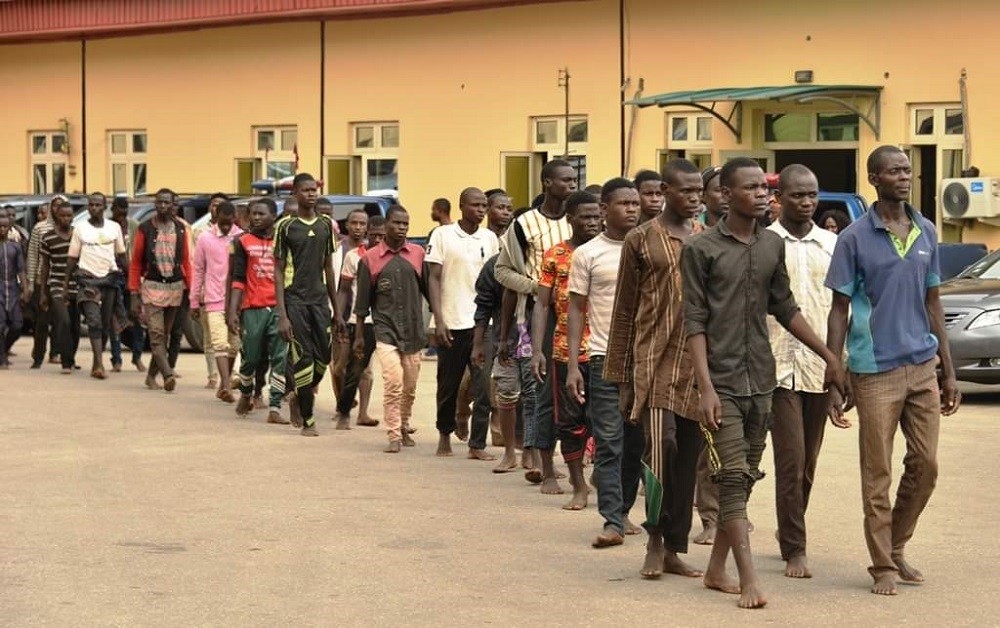 There is a direct correlation between the security challenge the North is facing and poverty in the region. To escape these two, there have been a mass migration of able bodied young men and women from the region to the south and unfortunately but not surprising, there have also been distribution of criminal elements among them in the south thereby escalating the security challenge the country is facing.

The Lagos State Environment Sanitation and Special Offences Task-force on Friday August 30, intercepted a truck laden with 48 motorcycles and 123 men coming from Jigawa State. “The truck was seized, following a tip-off by members of the public who raised security concerns about the manner with which the occupants of the truck conducted themselves,” the state government said in a statement on Twitter. On interrogating the truck’s occupants; it was gathered that the men some were coming from Jigawa State, with 48 of them claiming to own seized motorcycles. The rest of them said they came to Lagos in search of greener pastures. This men were treated and paraded like criminals, this gathered a lot of reactions and condemnation in the federation because it was succinctly argued that the arrest of this men, who hoped to secure a better opportunity at what life has to offer at the Center of Excellence, was an abuse of their freedom of movement according to the Section 41 and 42 of the 1999 Constitution.

While the arrest of the men might be wrong as it fringes on their freedom as Nigerians, it is not surprising that such is happening. Security experts said that infiltration of criminal elements from the north of the country into the south is already a big threat and poses as a security challenge. With the upsurge in migration from the North of Nigeria to the south, it is therefore not surprising that the killing spree has spread from the North to South of the country. No day passes without a report of armed herdsmen’s attacks on unarmed communities across the land; herdsmen with AK47 rifles, or kidnappers in operation. Lagos State has also has its own share of infiltration as suggested by some residents.

There is No Smoke Without Fire
Lagos state is the commercial and economic nerve centre of Nigeria, so it is not surprising when people flood into the state in search of a better life but it becomes suspicious when they begin to act with impunity and become too powerful for security forces to handle.

It was reported in major newspapers in the country earlier this year that there have been an influx of commercial Okada (motorcycle riders) from the North in the state. Though this should not be viewed with suspicion as many of them have escaped from the insecurity ravaging the North, what is alarming is the vices that some of them engage in. They acts as demigods in the state and have turned the state to their playground. Some of them have been accused of attacking innocent passengers with daggers and knives and motorists in the State have not also been speared of their violent outburst. Even when at fault, they attack motorists with stones, clubs and pieces of broken bottles and sometimes, motorists are deliberately accused. At the slightest provocation, they congregate into a mob and take the law into their hands; they vandalise the vehicle, injure the motorist and disappear into thin air. Security personnel have been unable to do anything about it because when apprehended, the police chiefs of their origin in most cases let them off the hooks.

Even constituted authorities such as policemen have not also been speared of their wrath. Earlier this year, a mob of armed Okada riders of Northern disposition had tried to invade Ejigbo Police Station in Lagos State with the claim that a police patrol van had knocked down two of their members. They threatened to incinerate the station but were repelled by the police teargas, but they did not leave without causing a damage. After being repelled at the gate of the station, they burnt down a patrol vehicle parked outside the premises. This was the height of impunity.

While many of them have no basic education, some of them can hardly express themselves in English language but they are owners of okada bikes. It was learnt that northern politicians use motorcycles to empower their youths and sponsor them to come down South to operate. While this is not a bad idea, what is surprising is the level of boldness they have when committing crimes.

According to the Telegraph investigation, some of them are not even from the country but neighbouring countries, the porous northern border has made their entrance in to the country very easy. These foreigners, who could hardly speak English learn Hausa language before moving down South in trucks in the dead of the night just to take up menial jobs. In most cases, they conceal their real identities to anybody and cannot communicate.

In view of the security challenge the state and the country at large is facing, it is therefore not surprising that the Lagos Taskforce decided to intercept the truck and document their details. Though there is nothing illegal about mass movement of people from one end of the country to another, in light of the present challenges the country is facing, it is important to be more security conscious and sensitive. However suspicious this movement is, until proven otherwise, the young men are free to seek greener pasture in the State.

Mass Migration traceable to insecurity and poverty
The interception of the 123 northerns sparked outrage from different quarters and northern groups have been vocal in their displeasure against the Lagos State government. Also the leaders in Jigawa state have also voiced out their displeasure. However the outrage was directed to the wrong quaarters because the Lagos State government is responsible for the security of the people of Lagos who voted them in and not to foreigners from other states.

Why should able bodied men be leaving en masse from one part of the country to the other to become okada riders, shoe shiners, “mai ruwa” and doing other menial works? How can the leaders in that region stop their youths from leaving? These are the questions that should be asked instead of whipping the tribal card and resurrecting a section of the constitution that have been ineffective in other areas.

When talking about poverty in Nigeria, the North comes to mind. It has even been said that poverty has a northern face, 13 states in the North-East and North-West of Nigeria were ranked among the “most miserable places on earth to live.” Nigeria overtook India to become Poverty headquarters of the world last year with over 89 million of its citizens living in poverty. Recently statistics show that over 92 million Nigerians are living in poverty and making under $2 per day. It is regrettable to say that Northern Nigeria contributes a large chunk to this number.

According to the data provided by United Nations Development Programme (UNDP), North West has 80 per cent poverty rate, North East (76 per cent), North Central (45 per cent), South West (19 per cent), South-South (25 per cent) and South East (27 per cent). On the aggregate, Northern Nigeria has 67 per cent poverty rate against Southern part, which has 24 per cent. The region has continued to remain underdeveloped while its leaders carry on, seemingly unconcerned and unashamed at presiding over the world’s poorest territory. This is the reason why it is expedite that policymakers close the poverty gap between the North and the South without raising the poverty rate in the South though freedom of movement is also important in the country.

Though poor governance, inept, selfish and corrupt leadership defy regional barriers in Nigeria, the quest for education and the values of self-improvement and aspirations to match the world’s best has enabled residents in the South to do better on human development indices, despite the incompetence of political leadership they share in common with the North. In the North, the leadership have successfully brainwashed the people through the instruments of religion and politics to think that the current order serves them well while the elite send their children to Western schools outside the country, the “Talakawa” meaning the commoner limit their children to Quranic education so that they will not be Westernised. Even when jobs are available, they cannot take it because they are not skilled to engage in intellectual jobs.

Adult literacy rate is recognized as key to raising living standards for the next generation and presence of an on-the-ground skilled workforce can lure investment. This is where the North is deficient because no society develops with an illiterate population. Nor do societies that elevates religion above development prosper or remain stable. The illiteracy rate is highest in the north and the number of out-of-school children is highest in the north and despite the severity in the illiteracy level in the North, the institutions and their intellectual branches focus more on how the region can retain political power and maintain a hold on decision-making in the country by controlling the bulk of ministries, departments and agencies via appointments and policies. They hardly devote their energies to combating the illiteracy which is fuelling poverty and in turn insecurity in the region.

The poverty in the north is disturbing and the government must wake up to its responsibilities because poverty/economic hardship is a root cause of insecurity. To save the North from itself and to save the whole of Nigeria, the northerns leaders should know that their selfish style of leadership is having a ripple effect that is resonating all around the country and they all have to set aside their selfish desires in order to liberate their people. Northern leaders also need to invest in education of the out-of-school almajiris and not expect the federal government to fund almajirai schools, while they misuse their resources in the divisive sponsorship of religion.

The leaders also need to overcome their poor, lazy and unimaginative leadership and make use of the vast agricultural and mining potential the region possesses to create jobs for its local masses instead of smuggling them in trucks and trailers to other regions in the federation to do menial jobs in the middle of the night.