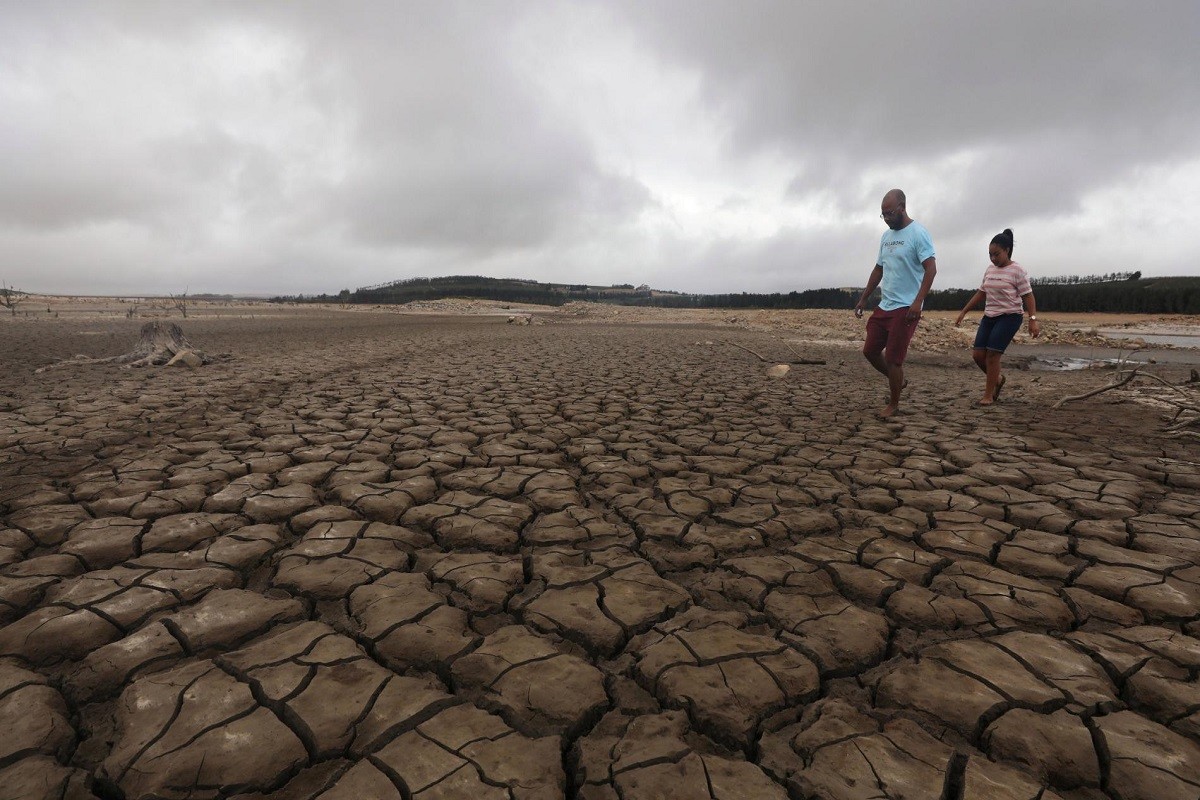 Human activities over the years have increased the concentration of greenhouse gases in the atmosphere, this has rapidly increased the average world’s temperature of the earth since the beginning of the industrial age.
In Africa, climate change is a reality, despite the fact that the African continent has contributed the least to anthropogenic factors causing climate change due to lack of industrialization in the region. Africa, responsible for barely 7 percent of the total greenhouse gas burden of the world would be the worst hit by climate change. According to environmental expert, “climate change is already taking place in Africa at a rapid rate compared to the global rate and the Africa’s temperatures have risen at twice the global rate ought to be.” The effect of climate change in Africa has resulted into drought, air pollution, rising sea levels, and desertification of the environment.

The continent has also witnessed a decrease in rainfall over large parts of the Sahel and Southern Africa, and an increase in rainfall in most parts of Central Africa. Temperatures are also exploding, a visit to Lagos, the commercial hub of the continent, will confirm this. The continent is witnessing very hot dry seasons and many rainy days during the rainy season. Countries such as Ethiopia, Nigeria, and Mali which is already some of the hottest in the world, are set to heat up 1.5 times more than the rest of the world.

Desert encroachment is also taking place. In March 2018, a study published in the Journal of Climate, shows that the Sahara desert – the largest desert in the world, has been expanding since 1920 due to shrinking rainfall and extended dry conditions. The researchers say that the Sahara has expanded by about 10 percent. This is about a staggering 1 million sq km increase. If it were a nation, the expanded area itself would be the 30th largest country in the world.

Global Warming, Local Effect
Global warming is the continuing rise in the average temperature of the earth climate system. Global warming occurs when carbon dioxide (CO2) and other air pollutants and greenhouse gases such as methane (CH4), water vapor (H20), and nitrous oxide (N20) collect in the atmosphere and absorb sunlight and solar radiation that have bounced off the earth’s surface. These pollutants, which can last for years to centuries in the atmosphere, trap the heat and cause the planet to get hotter. The more greenhouse gases concentrate in the atmosphere, the more heat gets locked up in the molecules. That’s what’s known as the greenhouse effect. Normally sun rays are suppose to bounced back away from the earth.

China with a population of roughly 20% of the world takes the lead in global-warming pollution, producing about 28% of all CO2 emissions. The United States comes in second, despite making up just 4 percent of the world’s population, the US produces 16% of all global CO2 emissions. This is as much as the European Union and India (third and fourth place) combined. Africa accounts to roughly 3% of the world’s carbon dioxide emissions from energy and industrial sources.

In the 2015 Paris Agreement on climate change, nearly all the world’s nations agreed to try to reduce greenhouse gas emissions enough to limit warming to “well below” 2 degrees by 2100 . Researchers have said that global warming of 2 degree Celsius still puts over 50% of the Africa’s population at risk of undernourishment. This is because at this climate change at this projection will lead to an equivalent of 2 to 4% annual loss in GDP in Africa by 2040.

Calls have increased since 2015 for the more ambitious goal of keeping warming to 1.5 degrees. That would mean fewer heat waves, spells of extreme weather and species extinctions.

The United States under the Trump administration said it would pull out of the Paris agreement because global warming is a hoax. Though the exit of the U.S will not be complete until 2020.

If Africa accounts for the lowest greenhouse gases emission, why is the continent vulnerable to climate change
Out of ten countries vulnerable to climate change effects, seven are African countries. This is because of the geographic location of the continent. Africa is the most centrally located of all the continents, located between the Tropics of Capricorn and Cancer
At present, the tropics are defined as being between 30 degrees north and 30 degrees south of the Equator. Within this roughly defined zone, temperatures are high all year round, this is because the equator gets most of the earth direct sun rays. The rays from the sun heats the air at the equator and you get both wet and dry seasons featuring thundering rainstorms and sweltering arid conditions, respectively.

The growing danger of Global Warming in the Continent
Much of Africa will experience prolonged heat waves and severe droughts. Water will become sparse, agriculture will fail, economies will crash, and incidences of conflict will increase. All these will be a direct consequence of climate change. The continent has also been witnessing extended spells of drought and extreme rainfall. There has also been rapid and successive swinging between dry and wet conditions in the south and east of the continent.

The whole of Africa is under the influence of climate change caused by global warming, from the elongated and heightened droughts in Eastern Africa; exceptional floods in Western Africa; reduction of rainforests in equatorial Africa; and a rise in ocean acidity across Africa’s southern coast and coupled with extremely altered weather patterns and climate extremes. These events have threaten agricultural production and food security, health, water and energy security, this as a result have weaken the continent capacity to grow and develop

Africa countries are more affected by climate change because of their dependence on agriculture. Land degradation and desertification are expected to affect African countries and this pose a danger to many Africans livelihood. African forest which serve as a reserve for the elimination of greenhouse gases is also rapidly depleted. Almost two-thirds of all energy generated in Africa comes from firewood, particularly for household cooking and heating, which adds to the pressure on existing woodlands.

Agriculture is considered as the largest main economic activities in Africa, it provides employment for approximately 60 percent of the African population, and more than 50 percent of GDP in some countries.
Flash floods amid prolonged dry spells have also caused soil erosion and this has degraded agricultural lands.
Millions of inhabitants also live on Africa’s large coast and their major source of livelihood for these residents is fishing. Ocean warming and acidification, a consequence of global warming are also depleting marine ecosystems. Value of fish is expected to decline by more than 20%, equivalent to an annual loss of US $310 million per year by mid-century.

Extreme weather condition has also brought about migration, herdsmen have been on the move towards the south of the sub-Sahara in search of greener pasture for their livestock. This has brought about competition and conflict between the herders and their host communities who are crop farmers.
While extreme weather is exposing Africa’s infrastructural and economic frailties, another creeping risk that is becoming more evident is the impact of changing climate on food security in the continent. The continent which is also experiencing a population explosion will be at risk of famine in the nearest future, report says global warming of 2˚C would put over 50% of the continent’s population at risk of undernourishment. Projections estimate that climate change will lead to an equivalent of 2% to 4% annual loss in GDP in the region by 2040.

Unfortunately, as things stand, Africa plays a very small part in a world economy yet they are most affected in the Global warming, as a result of its geographical position. Africa never enjoyed the financial benefits generated by putting greenhouse gases in the atmosphere but will suffer for the actions of the developed world. This makes Africa a double loser in the globe. Africa lost out of industrialization and also made to suffer the consequences of industrialisation. A pity some people call global warming a hoax including the president of the United State, and are not willing to compromise, despite the effect is glaring to see.