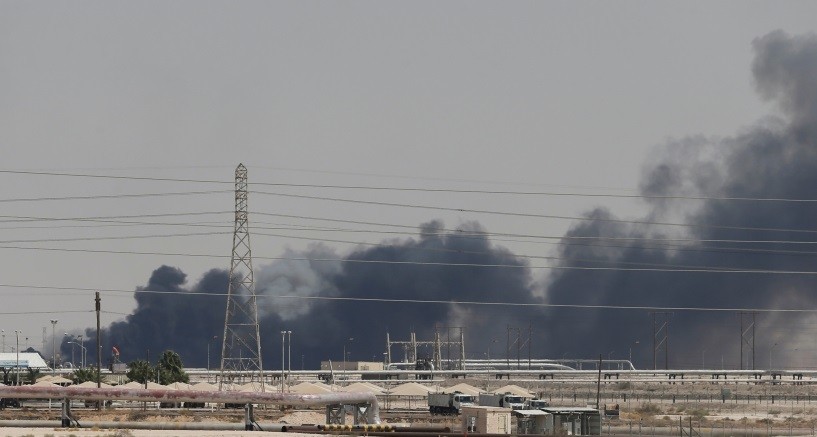 The prices of global energy spiked on Monday (September 16) after a weekend attack on key oil facilities in Saudi Arabia, the attack caused the worst disruption to world energy supplies on record.

At 3.31am and 3.42am on Saturday, loud explosions erupted at Khurais oilfield and Abqaiq processing facility, both owned by Saudi Aramco, the country’s state-owned oil company. The explosions set off fires that took several hours to douse and appear to have caused significant damage. The attack disrupted about 5 million barrels of the country production, this is nearly half the kingdom’s estimated output of 9.7m barrels and 5% of global production. The attack was one of the biggest attacks on global energy infrastructure in decades.

The Abqaiq facility as described as Saudi Arabia “Jewel”, it was the largest crude oil stabilisation plant in the world and it is thought to be able to process up to 7 million barrels of crude a day, or roughly 7% of the world’s crude output while the Khurais oil field, also attacked, is thought to produce more than 1 million barrels of crude a day. Khurais oil field has an estimated reserves of more than 20 billion barrels while Abqaiq facility refines and clean the oil from impurities such as sulphur and sand. Yemen’s Houthi rebels, who have been locked in a war with a Saudi-UAE-led coalition since 2015, claimed responsibility for the attacks, warning Saudi Arabia that their targets “will keep expanding.”

Why was Saudi Arabia attacked
A Saudi-led coalition has been at war with the Houthi movement in Yemen since March 2015. The Iranian-backed rebels hold the capital, Sana’a, and other territory in the country.

According to the US-based Armed Conflict Location and Event Data Project, the war has triggered the world’s worst humanitarian crisis and has pushed Yemen to the brink of famine and more than 90,000 people have been killed since 2015. Yahya Saree, a spokesman for the Houthi-rebel-run Saba News Agency, on Monday (September 16) said the group may launch additional more painful strikes as long as Saudi Arabia’s government continues its aggression and blockade on Yemen.

According to the United Nations, the Houthis recently acquired much more powerful drone technology that has given them the power to strike targets up to 1,500km away and the Abqaiq facility is within about 1,000km of Houthi-held territory. In the past months, there have been unconfirmed reports of attacks by Houthi drones on civilian airports in Saudi Arabia, Abu Dhabi and Dubai.

Spokesman of the Saudi-led military coalition Colonel Turki Al Maliki told reporters in Riyadh that the strikes were not launched from Yemen as claimed by Iranian-allied Yemeni rebels who are at war with Saudi Arabia and the attackers also carried out the attack with Iranian weapons. Colonel Maliki said that Iran cowardly targeted the global economy and not Saudi Arabia.

The U.S. government also released satellite images from intelligence report showing the extent of the destruction at the Abqaiq oil processing plant and suggested that the “staging ground” originated in Iran or Iraq and not Yemen, where Saudi Arabia is fighting Iran-backed Houthi rebels.

Britain – Washington’s close ally have been careful in its utterance and do not want to be involved in the US hardline Iran policy and the country stopped short of ascribing blame but described the assault as a “wanton violation of international law”.

Russia and China said it was wrong to jump to conclusions about who was to blame for the attack on Saudi Arabia.

United Nations Yemen envoy Martin Griffiths told the UN Security Council on Monday that it was “not entirely clear” who was behind Saturday’s attack on Saudi oil facilities but he said it had increased the chances of a regional conflict.

Secretary of Energy Rick Perry in an address to the International Atomic Energy Agency’s general conference in Vienna on Monday had this to say; “Make no mistake about it, this was a deliberate attack on the global economy and the global energy market.”

In response to the accusation, Iran dismissed it and tagged it as “unacceptable.” Iran denied a role in specific attacks, including bombings of tankers in the Gulf and previous strikes claimed by the Houthis.

The Iranian Foreign Minister Mohammad Javad Zarif, said that blaming Iran for the recent attacks on Saudi oil plants “won’t end disaster” but accepting the 2015 nuclear deal and beginning talks may do. Zarif added that the “US & its clients are stuck in Yemen because of illusion that weapon superiority will lead to military victory.”

It should be said that for months, Iranian officials have issued veiled threats, saying that if Tehran is blocked from exporting oil, other countries will not be able to do so either. So it is not surprising that they are blamed for the attack.

Global Impact of the Saudi Arabia drone attack
Saudi Arabia is not only the world’s biggest oil exporter; it also has a unique role in the market as the only country with enough spare capacity to increase or decrease its output by millions of barrels per day, keeping the market stable and compensate for any deficiency in supply caused by war or natural disaster. This has made the Arab nation revered in the energy market and not until recently, the country through OPEC controlled the oil market as the de-facto leader. Saudi Arabia was the largest producer of oil in the world until last year when the United States took the honor, thanks to the wonders of hydraulic fracturing and horizontal drilling

Though the attack on Saudi oil facilities last Saturday (Sept 14) not only knocked out over half of the country’s production and removed almost all the spare capacity available to compensate for any major disruption in oil supplies worldwide but gone are those days that even a temporary spike in oil prices can be disruptive, especially at a time when the global economy is already showing weakness.

The world’s major oil producers excluding Iran have spare output capacity of about 3.2 million barrels a day, according to the International Energy Agency. Saudi Arabia accounts for about 70% of that, at around 2.27 million barrels per day. Before the attack on Saturday, OPEC and its allies such as Russia have cut output to prevent prices from weakening because the market has been oversupplied, the cuts aimed to reduce supply by 1.2 million bpd.

The US has not only become the world’s top crude producer after years of rapid growth in supply from the shale sector, much of it pumped from fields in Texas but has also grown as an exporter. According to the Energy Information Administration, the U.S. is expected to export more energy than it imports by 2020, making the country the largest oil exporter in the world.

The attack on Saudi oil fields over the weekend caused the biggest disruption of oil production edging out 5.6 million-barrels-a-day disruption around the time of Iran’s 1979 Islamic Revolution. But unlike before, the disruption is not so devastating as it would have been. This just shows how much the energy market has changed and how actors in the oil market has also changed. Saudi Arabia no longer have total control of the oil market but it is ceding it power to the US and Russia, both are not members of OPEC. US President Donald Trump said yesterday that America has become such a big oil producer that it no longer needs petrol from the Middle East. Writing on Twitter, Trump said: “Because we have done so well with Energy over the last few years (thank you, Mr. President!), we are a net Energy Exporter, & now the Number One Energy Producer in the World. “We don’t need Middle Eastern Oil & Gas, & in fact have very few tankers there, but will help our Allies!”

As expected, news of the attacks jolted the financial markets and sent the oil price soaring on Monday (September 16). Gold rose after the attack on oil facilities in Saudi Arabia inflamed worries over the stability of the Middle East, boosting demand for assets seen as a haven from risk. Spot gold was up 1.02% at $1,503.69 per ounce.

The price of a barrel of Brent crude surged by 20% early on Monday to nearly $72 (£58, up from $60 per barrel). That was the biggest move ever recorded since the contract was created in the 1980s. Later in the day, it dropped back to about $66 per barrel after Donald Trump pledged to release some of America’s oil reserves, to make up the shortfall from Saudi Arabia. U.S. benchmark West Texas crude oil was up around 9%. U.S. gasoline and heating oil were up over 8% and 7%, respectively.
But traders still spoke of a long-term price increase as markets absorb the proof that global supply can be so sharply hit. Economists also believe the oil price could rise higher if Aramco cannot bring supplies back online quickly, or if there is military action in the Gulf.

While disruption in Saudi Arabia could cause prices to rise any prolonged price increase above the mid-$60 level will only unlock more production in the U.S. shale and this is good for the US economy. Shale producers can move quickly to pump more when prices rise, and can bring production online in a matter of months. The shale industry need three to six months to bring new production on line.

How does this attack impact other OPEC nations
Before, an attack of such calibre means big bucks for other OPEC members but the narrative have changed greatly and OPEC relevance in the oil market has long faded when the US began its exploration of Shale oil. Not only is the US, Russia Saudi Arabia responsible for 70% of global supply, many OPEC member states are experiencing internal instability and insecurity.

Citing Nigeria as an example, the resilience of Boko Haram and assorted insurgents in the Niger Delta mean that Nigeria is not at all well placed to step into any supply gap created by a Middle East war as it was able to do during the Gulf War in 1991. Another country that cannot partake of this blessing in disguise is Libya, the country is in the middle of a civil war, which threatens its ability to continue pumping oil.

The best that can happen to Nigeria is a small increase in crude oil prices, but not of the scale of the “Gulf Oil Windfall” of 1990/1991. Any long term increase in oil price will only unlock more shale into the market and push away oil from OPEC members. An escalation due to retaliation by the Saudis backed by the US on Iran will mean that the disruptions will last significantly longer. There is however limited appetite for that kind of crisis that could not just lead to a prolonged period of high oil prices, but a trigger global recession or even a depression.

US interest in the Middle East had always circulate around oil but with the discovery of shale, it seems the country has lost interest. Donald Trump on Monday said they no longer need the Middle East for oil and he had not made commitments to protect the Saudis. Trump has spent much of his presidency trying to disentangle the United States from wars he inherited and he has made it clear that he was not going to rush into a new conflict on behalf of Saudi Arabia.