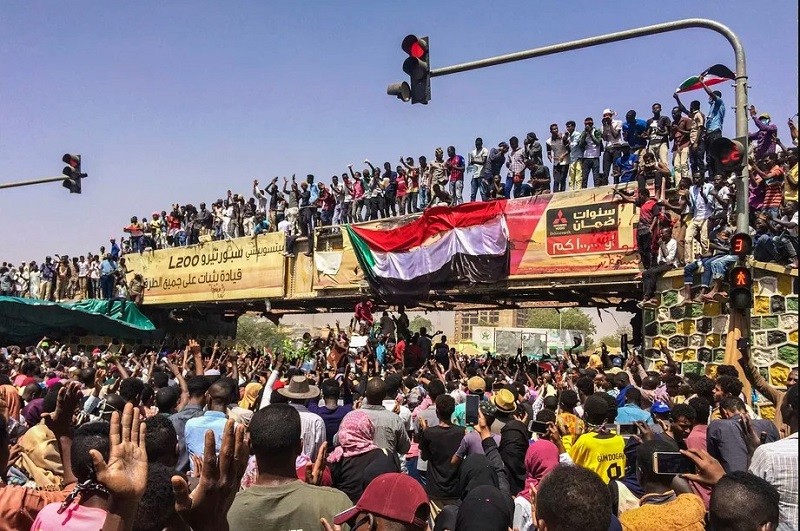 The Sudan Revolution that ended Omar Hassan al-Bashir’s 30-year presidency on April 11 was supposed to usher in democracy in the Arab country but with the way the Transitional Military Council (TMC), the current military junta governing Sudan, has handled the later events, one can say that the military had another agenda when it forced the dictator to step down.

Prior to the 2019 protests that brought down al-Bashir, the country is no stranger to protest, in fact the country was part of the Arab Spring in 2011, but protests were quickly quelled down by fierce government crackdown. Major demonstrations also took place in 2013, and even at the start of 2018. But they were primarily centered in the country’s capital, Khartoum. These protests were also met with fierce government crackdowns.

However, that soon changed in December 2018, the protest that began as a demonstration soon became full blown and spread from the capital to other parts of the country. These protests evoked the memory of the Arab Spring of 2011 and was met with strong opposition from the security forces. Despite the lethal force used by the security, the protests thrived and in one voice, under the umbrella of Sudanese Professionals’ Association (SPA), who were frontliners in the Sudan uprising, the people had their wishes, or so it seems.

After 30 years of oppression, tyranny and bloody repression, a group of generals arrested Bashir and announced the end of his decades of rule but instead of giving in to the wishes of the people to usher in a civilian government, they took over al-Bashir government.

The protest that gave birth to the toppling of Al-Bashir government has been widely hailed as a revolution brought on by the people but many months after he stepped down, Sudanese are still protesting for a civilian government.

Before the June 3 massacre, protesters and the generals had agreed on several key issues, including the three-year transition and the creation of a 300-member parliament, with two-thirds of lawmakers coming from the protesters’ umbrella group. But negotiations stalled as protest leaders insisted a civilian must head the new sovereign council, with civilians making up the majority of its members, proposals rejected by the military.

To the protestants, this looks like Egypt all over again where Egyptian president General al-Sisi took Egypt to the elections, oppressed the protests during and after the elections, and established a regime, one that is not much different from the rule of former Egyptian leader Hosni Mubarak. Mr. al-Sisi rose to power after the Egyptian Army killed up to 1,000 largely unarmed protesters at a sit-in at Rabaa Square in Cairo in 2013.

Is it a coincidence that the June 3 massacre resembles Egypt’s 2013 Rabaa Al-Adawiyya massacre, given that General Abdel Fattah al-Burhan and his and vice, Mohamed Hamdan Dagolo both visited Egypt recently?

Influence of the Gulf nations, Egypt and the June 3 massacre
Saudi Arabia and the United Arab Emirates and Egypt have a vested interest in ensuring the army remains in power or in installing their own government in Sudan.
For weeks, protesters occupy the capital, Khartoum, in a peaceful sit-in but on June 3rd, the Rapid Square Force (RSF) surrounded the sit-in camps at Sudan’s army headquarters, beating many protesters and burning tents while people still slept inside; women were raped, as were children and even men; and live ammunition was fired at people fleeing for their lives. More than 100 people were shot dead and dozens more wounded. The Sudanese doctors said that 40 bodies were recovered from the Nile river.

Days before the massacre, the president of the Transition Military Council, General Abdel Fattah al-Burhan and his and vice, Mohamed Hamdan Dagolo, went on a tour visiting Saudi Arabia, UAE and Egypt. Saudi Arabia and the UAE also pledged to give a donation of $3 billion dollars in aid and cash to float their economy. There were some voiced suspicion that this money came with conditions.

This point was also buttress by a Sudanese military expert who spoke anonymously to the Middle East Eye magazine, he said, the head of Sudan’s ruling military council was given a “green light” by Saudi Arabia and its regional allies to crack down on protesters who camped for weeks outside the military’s headquarters. The well-informed expert said that plans to destroy the protest camp in Khartoum had been discussed during recent visits to Saudi Arabia, the United Arab Emirates and Egypt.

But Why The Interest in Regional Politics by Egypt and The Gulf Nations
Sudan is important to Saudi Arabia and UAE because the country is directly involved in the Saudi-led war in Yemen. A civilian democratically elected government may jeopardise the standing Sudan has with these gulf nations and Saudi Arabia, limited by its own military’s manpower constraints, will not want that. So it should not come as a surprise when the RSF shot at crowds of protesters and went into the sit-in to rape and maim protesters, they had the backing of a foreign ally that can guarantee their safety and continuous stay in power. These protests are threats to Saudi Arabia and UAE.

Since 2015, when ousted Sudanese President Omar al-Bashir broke its decades-old ties with Shiite Iran and join the Saudi-led coalition, Sudanese military forces have been participating in the coalition campaign in Yemen, while Saudi Arabia and the UAE have invested heavily for regional design from Yemen to Libya. Moreover, these states will only tolerate democratic experiments in Sudan so far as they do not contradict their own interests. Among other things, they want to limit the power of their regional rivals Qatar and Turkey, as well as that of the Muslim Brotherhood. Saudi Arabia also desperately needs the continued support of Sudanese soldiers for its coalition fighting in the war in Yemen.

Sudanese media reports claim that many of the Sudanese troops fighting in Yemen are from the Rapid Support Force (RSF) paramilitary group. Hundreds of Sudanese soldiers and officers including children are fighting in Yemen and have suffered casualties, raising calls for a withdrawal.
Cairo also seems similarly concerned about the events in Khartoum. Egyptian president Abdel-Fattah al-Sisi fears that the Muslim Brotherhood, which Eygpt has been trying to silence, could fall on fertile ground in Sudan. If the Muslim Brotherhood gains support in Sudan, al-Sisi believes that its success might strengthen the group again in Egypt. The UAE and Saudi Arabia consider the Muslim Brotherhood a terrorist organisation.

Sudan Power-sharing Deal
While politicians of other Arab nations continue to watch the developments in Sudan with a certain degree of concern, it is believed that a successful grassroots protests in Sudan could set an example for citizens in the Arab Peninsula. It is therefore no surprise that both the United Arab Emirates and Saudi Arabias appear to be supporting the military regime.

The recent agreement reached by the two sides agreed on establishing a sovereign council with a rotating military and civilian presidency for a period of three years or a little more. The agreement will see the military in charge for the first 21 months, then a civilian-run administration for the following 18 months. It was also agreed that five civilians, five military and one independent observer will make up the transitional council and elections will be held once this transition period ends.

While many have hailed this agreement to be a welcome development, this new development does not spell “victory at last” for me and I remain sceptical of the victory acclaimed to such agreement. All I see is a stall by the regional powers backing the military to buy time to do as they wish with the agreement. It would have been more convincing if the civilian government was allowed to rule first before the military rule or at least more seats given to cilivians in the Transitional council.

Saudi Arabia and the United Arab Emirates operates under a monarch and the fear of democracy shown by these kingdoms will not allow them to support a democratic elected government. Also with the heavy investment on Sudan, it is likely they influence the future Sudanese government. However, 21 months is too a long time for the military and a lot can happen. Within this period, Saudi Arabia and UAE will likely manage the transformation of the country to prevent civilian rule in Sudan. This desire to prevent the election of a democratically elected leader by the Sudanese people is also shared by regional ally Egypt.