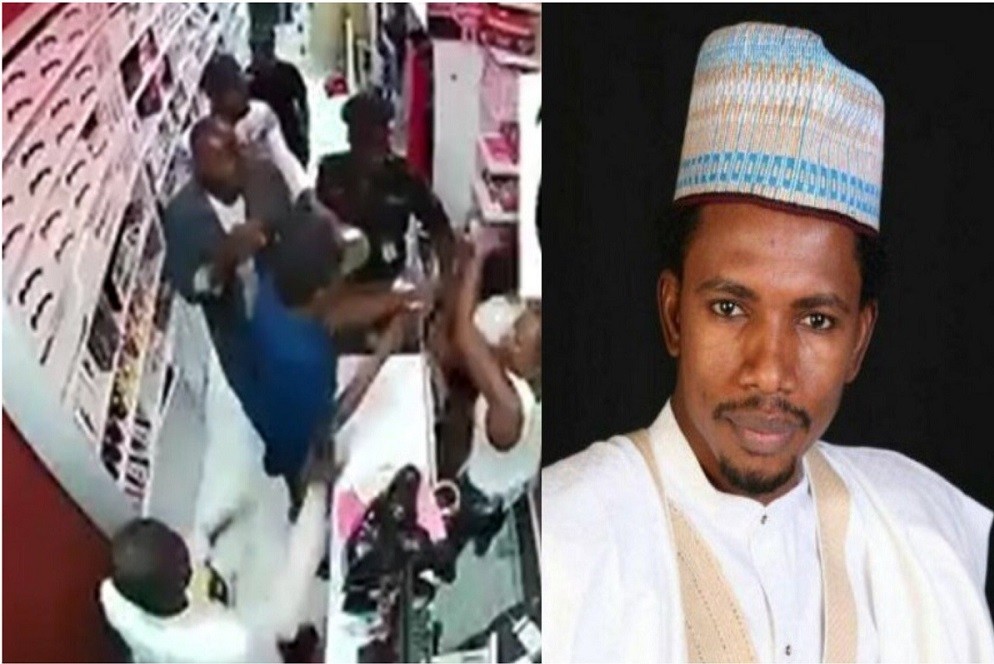 Woman Beating until now, obscure 41-year-old Nigerian senator, Elisha Abbo, has managed to force the attention of the media space, new and traditional, unto himself in an incredible fashion.

While an alleged serial sexual predator-pastor and President Buhari’s misty “RUGA” cattle policy had been enough battle of ideas and counter ideas for increasingly hapless citizens, a video of the young man, in fact the youngest of the recently inaugurated highest paid senators in the world, assaulting a sales woman in sex toy shop surfaced online.  Abbo’s fiendish cowardice has thereafter set both virtual and physical discussion spaces abuzz.

Firstly, it will be yet another low for Nigerian justice system if that little man does not get his deserving whips from the Nigerian laws. Some news media have reported his invitation by the Nigerian police. And even his investigation by the Senate.

We should still believe that Nigeria is a nation of  “supposed laws”; more importantly, we should not be in doubt that the laws work for everyone. And that the laws do not suddenly become impotent as soon as anyone, even with the swiftest inclination towards bestiality, gets into a position of power.

The submission of Festus Keyamo, lawyer and Senior Advocate of Nigeria, on the issue, that was obviously drawn from legal standpoints, mirrored that of other commentators. He had said via his Twitter account @fkeyamo, that, “The case of Senator Elisha Abbo is very straightforward: the Police MUST IMMEDIATELY take three steps: 1. Arrest him (no formal complaint is needed with the evidence on tape). 2. Obtain his statement (if he is willing to make one) and that of the victim. 3. Arraign him in court.

Hopefully, the Nigerian system would not fail the victim and insult the sensibilities of Nigerians on this issue. That said, the import of Abbo’s misbehaviour wouldn’t have been lost to the proponents and believers of the popular #NotTooYoungToRun movement. It is a setback, period.

Of Rt. Hon Dimeji Bankole’s Mischance in House of Representatives
Abbos’s case also serves to beam lights on other so-called young political leaders that have proved to be unwanted models for youth inclusion. I don’t think Rt. Honourable Dimije Bankole’s stint as the Speaker of Nigeria’s House of Representative (2007-2011), thus the fourth most powerful Nigerian at the time, did much to act as a convincing proof of the positive leadership coupled with youthful dynamism a young Nigerian could offer. A test of

Bankole’s legacies at the House was his unsuccessful attempt to govern his home state, Ogun, at the last General Elections. His campaign barely managed to gain considerable traction even in his city of Abeokuta.

Of Senator Dino Melaye and Governor Yahaha Bello’s Spat
Has Senator Dino Melaye been much of a model for the youths in our quest to get deserving chances at the seats of leadership of our country? Minus his histrionics and tantrums, one can hardly point to what the two-term senator and former member of the House of Representatives offers. Perhaps, the fact that the former President of the Senate, Bukola Saraki, is no longer in the upper legislative chamber to offer the kind of shield Senator Melaye ostensibly got in the last dispensation, Nigerians, especially the youths might get a more level-headed and importantly progressive representation from the Kogi-west senator.

What about Governor Yahaya Bello of Kogi? Apart from being Melaye’s constant spatting-mate, the constant news stories that assail Nigerians’ consciousness from Bello’s end is that of an unimaginable anguish being suffered from his hands by the workers and citizens of his state whom he owes incredible number of months’ salaries and his refusal to deliver the dividends of democracy to his people. Even while he has, in the last few weeks, begun to dangle some Greek-gift carrots to the citizens, it cannot be lost to the people that it is a grumpy efforts devised to get the people’s votes for his re-election bid. Forebodingly, Bello and Melaye may be presented as choices for the Kogi people in the coming gubernatorial election of the state.

Of NANS and Parody of Leadership that Obtains on Nigerian Campuses
I was and still a believer in the substance of the movement, as I am a young Nigerian. Yet I have always been a cautious believer. In as much as I strongly advocate for inclusiveness in the leadership configuration of the country, I do not subscribe to the notion of age factor in the delivering of good leadership. Being a recent graduate, I so much witnessed the desecration of leadership ethos, especially the crass profiteering tendencies of youths in positions of leadership on a Nigerian university campus.

I also observed the sorry state of and the lie that was (and is) the for-pecuniary-gaining National Association of Nigerian Students (NANS). Sadly, NANS’ unconscionable leadership continues to make mockery of the lofty height we often read that the body once reached in the past. On most campuses, Nigerian youths in positions of leadership often act as the obverse of their senior counterparts in the larger society. In other words, most youth leaders and older Nigerian leaders are like the case of six and half a dozen.

Calls for More Work
Suffice to say that it will be too disingenuous, as a result of Abbo’s misdoing, to completely diminish the immense gains accruing from the “NotTooYoungToRun” movement which culminated in the amendment of the elective requirements, age-wise, to political positions. Abbo’s act merely reflects his own flawed humanity. It has to be said, however, that young ones in leadership must realise their positions require exemplary behaviours. It is to be hoped that the young leaders will become cognizance of the import of their performance and comportment in their positions and; especially, that they will not fail to see how their good conducts and good disposition towards leadership may serve to open more paths for their fellow young ones. I, especially, look forward to seeing the movement, that is the #NotTooYoungToRUN“, gets a much needed fillip from the performance of the various young Speakers of some of the State House of Assemblies that have been elected.